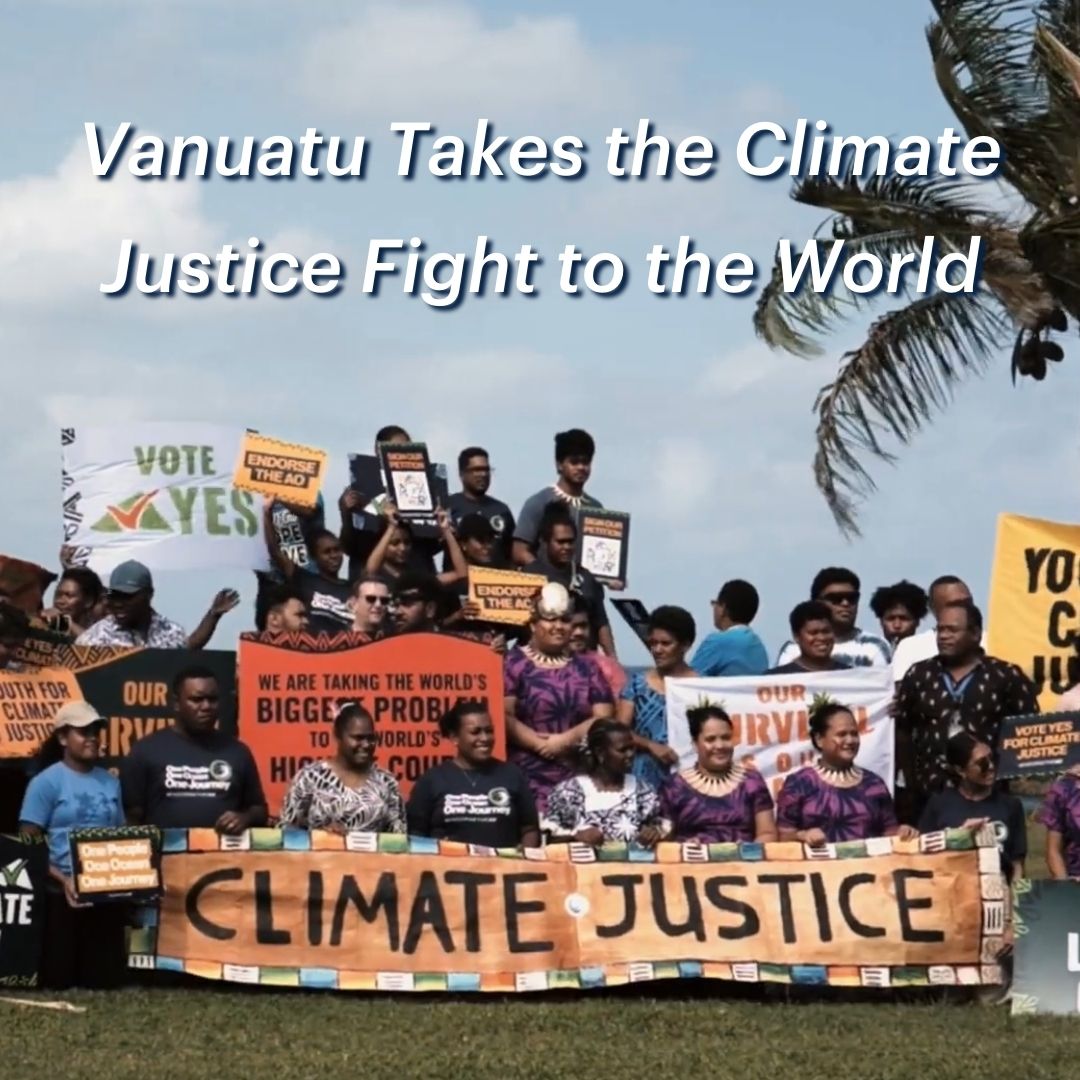 Vanuatu Takes the Climate Fight Justice to the World

“Many small people in small places, doing small things, can change the world” these words were said once by the Uruguayan journalist Eduardo Galeano, to encourage the small actions a few people do around the world for a better home to all of us, and this is a call to take action on what we are currently doing to have that better world for future generations.

Actions speak louder than words, and so it was the case for 20 students from the University of South Pacific in Vanuatu in 2019 when they realized that their homes and communities have been suffering by the rising of sea levels (Climate Change) and the lack of support from the Nations and international institutions to reduce this impact.

These young activists have been raising their voice to ensure the survival, and wellbeing of current and future generations. They proposed, as reported by  TIME Magazine,  to persuade the International Court of Justice (ICJ) to issue an opinion on climate change regarding countries’ accountability.

This topic has been proactively escalated by Vanuatu’s Prime Minister,  Hon. Bob Loughman MP, who, with growing concern over the issue decided to act decisively to use his leadership position to lend a powerful voice to articulate the  proposal from the group of enthusiastic students to propel the issue to the International Court of Justice (ICJ). The initiative has gained steady momentum and has successfully attracted the consideration of  the South Pacific region. Tellingly, , it was a main point of discussion in the recently concluded  Pacific Islands Forum (PIF) meeting in Suva, Fiji.

Included in the growing band of supporting Pacific countries,  countries like Australia and New Zealand have joined the call and lent  welcome support and moral weight to this action. By the same token, the Caribbean Community (CARICOM) and The Organisation of African, Caribbean and Pacific State (a 79-Country Bloc) have endorsed the proposal tabled  by Vanuatu, forming a coalition of the willing, all with  a common purpose: to reduce the Climate Change impact in the world.

This is an uphill battle however.  Some economists and international law specialists have stated that there are political implications that will make the project struggle to meet the main goal. Prof. Douglas Guilfoyle (a professor of international law and security at the University of New South Wales’ Canberra) is one such cautionary  who is quoted as saying “This will be a challenge as any question that involves issues of responsibility or liability is unlikely to receive widespread support.” He explained that big nations have already failed in a range of international commitments and support (especially regarding Climate Change) since different industries of those countries have a self-interest in continued, unbridled economic development.

Although the future is far from certain, what is sure is that Vanuatu has done what it can  to raise its voice on behalf of the rest of the world and offer future generations the chance of a better place to live.  Vanuatu, along with its supporters believe that an ICJ advisory opinion  when presented to the highest level group of countries – who all share collective responsibility for climate change – will bring the prospect of relief to the affected countries.  As Prof. Guilfoyle puts it,  “Nothing is ever certain in a U.N. vote, but I’d be optimistic for Vanuatu’s chances,”

Following the example of the beautiful archipelago of Vanuatu, we might consider that small we may be, together, we can achieve great change.

Vanuatu Government speaks out against false news regarding the Vanuatu Passport visa-free access to EU and UK.